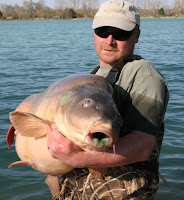 The huge mirror carp is nicknamed the The Scar, or the Scarred Mirror, and has been caught at bigger weights over the last couple of years.

The carp is believed to be tied up to a tree with a rope around it's body in it's younger years and has a big scar as a result of that.

The latest known catch of The Scar was in september 2009, weighing in at 88lb 8oz. Next year will be exciting, since especially the renowned Rainbow Lake near Bordeaux in France is home to some very big carp as well.

Since The Scar was last caught at 88lb, there is a chance that a bigger carp will be caught in 2010.

This brand new website will keep you up to date about the current world record carp and other giant fish caught in France and around Europe.

Soon we will be posting more information, maps and news, so stay tuned!

On the map below you can see the location of Les Graviers on the map of France. Check out owner Luke Moffatt's website here for bookings and more information.