The new world record carp has been caught at 94 lb on the French Rainbow Lake. Martin Locke of Solar Tackle caught the huge mirror on Monday January 6th 2010 at 6 a.m.

The huge carp is the new world record, breaking the previous record fish of 91 lb from Les Graviers located in France as well.

The carp was caught at Rainbow Lake's peg 12, with outside temperatures of -3C. A year ago Mr. Locke caught the same fish at 84lb. The new world record carp was the first and only catch during a one week fishing trip.

Check out the map of Rainbow Lake in France below, and get directions.

The French Fishery Rainbow Lake, located near Bordeaux between the villages of Hostens and Le Tuzanin in the south of France, is known for it's huge specimen carp. It's located in a beautiful area as you can see on the satellite image above. 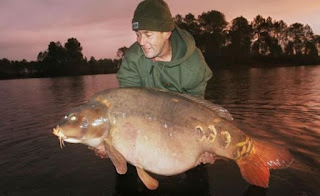 The 46 hectares area is fenced an guards watch over the security of the anglers. There is a club house with showers, restrooms and telephones are available to the fishermen and their guests.

The depths of the lake varies from 1,5 to 15 , it has two large wooded islands of 2 hectares and many little islands, a paradise for fish and fishermen.
France Rainbow Lake World Record