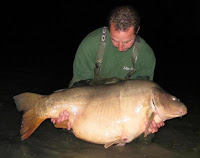 The well known mirror carp 'The Scarred Fish' from Luke Moffatt's Les Graviers near Dijon in France has been caught recently at a staggering 99lb, breaking the previous world record of 94lb from Rainbow Lake near Bordeaux.

Ambrose Smith caught the Scar at a new world record weight of 99lb, according to a blog post by Lake owner Luke Moffatt on Carpforum, dated June 5th 2010:

"Just to update everyone on the recent capture of the Scar at 99 lbs...

It was caught, and it did weigh in at 99 lbs...The scales are on their way to be verified at W&M..but I'm certain they are acurate.

The fish has gained 8 lbs in weight since it's last capture 5 weeks ago (see picture above), which can only be down to the fish taking on water just prior to spawning, which is part of the normal spawning process....I'm a bit concerned for the fish at the moment, and will feel a lot better once it has spawned successfully.

Hopefully we will get to see it again fairly soon, back at it's normal spawned out weight, as it's in a very delicate condition at the moment, and we can't understand why it was even interested in feeding just prior to spawning.

I doubt if there will be a record claim this time, as my mate caught it while I was taking a weeks break in the South of France, and he has no independant witness, just his family...
The fishes condition is taken into account too...if it gets caught again at a similar weight then thats different....But it's his shout at the end of the day, so if he wants to claim it he can.

But look on the bright side of it.....even though it was holding water, it shows the fish is capable of supporting such a weight, and happy to feed too! so could maybe achieve a similar regular weight one day....but I think it will take it a fair while to do that though to be honest.

Ambrose Smith, the fella that caught it.....took a handfull of pictures and got it back as soon as possible, he was quite worried about dealing with the fish with out me being there, as he was aware of how close to spawning they were.... I'll ask a mate to post one up here so you can all have a look.

Well done to Am' though...he caught the Scar and it weighed 99 lbs!...I understand it's a new PB for him.

regards to all, Luke" 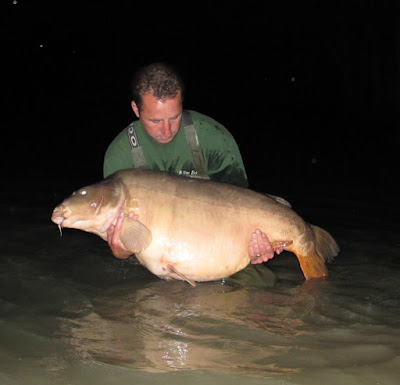 Ambrose Smith with The Scar at 99lb
Allthough the capture is a new world record, it still isn't clear if this will be acknowledged as the official new world record carp. In January a 94lb mirror was caught from French fishery Rainbow Lake, breaking the previous world record of 91lb held by The Scar from Les Graviers.

As soon as we get more information and pictures about this amazing (potential) new world record carp, this website will be updated!
France Les Graviers The Scar World Record

Jason said…
It appears that the lake was shut down for 3 weeks to help the fish with their spawning.

Luke's friend Ambrose was watching and fishing the lake while Luke Moffatt was away for only the second time in 10 years (!). The weird coincidence is that the current (or should we say previous?) world record holder Martin Locke (rainbow lake 94lb) was fishing Les Graviers only 2 days before Ambrose Smith caught the Scar!!