The world record common carp was broken again in June by British angler Roger Hanley at Les Teillatts in France.

The fish, nicknamed 'The Generals Mate', was caught at 88lb 2oz, just breaking the previous world record common carp 'Mary' caught in Germany in May 2010.

The impressive catch was made by British angler Roger Hanley during a week long session at the renown French fishery Les Teillatts, most famous for it's huge common carp. 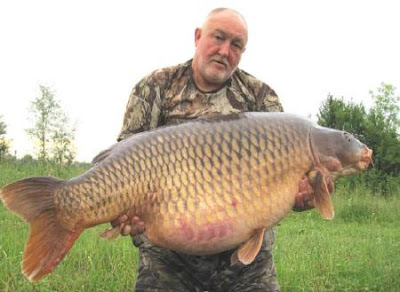 Earlier in June 2010, another huge common carp was caught at Etang La Saussaie by 10-year old Nick Edson. Edson at the time broke the French record with his 84lb common carp, followed only a couple of days later by the new French and world record capture of The Generals Mate at Les Teillatts.

LES TEILLATTS
Apart from the Generals Mate, Les Teillatts is home to a huge number of other big carp, including mirror carp of 76lb and 79lb, caught as well in May 2010.

The 35 acres Lake is owned by Cross Channel Carping, that offers complete fishing trips, including transportation from Dover to Les Teillatts.

Check out a short Youtube video from the venue below.