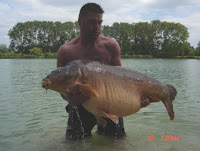 Within 17 days after the world record carp was broken at French fishery Les Graviers, The Scar was caught again at 99lb.

John Bryan caught 'The Scar' at 99lb on June 22, only 17 days after Ambrose Smith smashed the world record carp with exactly the same fish.

After this latest capture no doubts remain that the scarred mirror is officially the new world record carp. 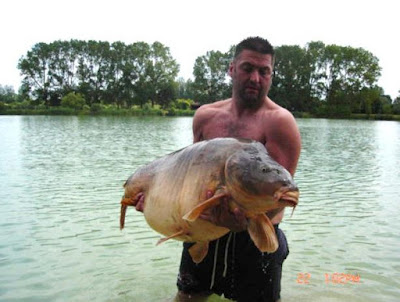 The big question right now is when this huge fish will break the magic 100lb barrier.

jimmy tank said…
I DONT KNOW WHAT ALL THE FUSS IS ABOUT A 100LB CARP,THEY FREQUENTLY GET CAUGHT OVER 200LB OUT IN ASIA THE GIANT SIAMESE IS THE ONE TO HUNT WHICH GROWS IN EXCESS OF 300LB,NOW THATS A CARP FOLKS.SO NONE OF THESE EUROPEAN FISH CAN BE CLASSED AS THE WORLD RECORD CARP.ONLY FOR THE MIRROR OR COMMON CARP RECORD.ET YOURSELVES OUT TO ASIA ITS TAKES CARP FISHIN INTO ANOTHER DIMENSION.TIHT LINES EVERYONE.JIMMY T
July 12, 2010 at 10:16 PM

Anonymous said…
You don't understand carp fishing mate. Those Asian carp look like the floaters in my toilet
November 21, 2012 at 9:16 AM

Anonymous said…
what a stupid comment lol in fact so stupid Im doing something i very rarely do and thats comment.... ha. Siamese carp are not part of the the more shy inteligent and wary KING CARP strain of the species, these fish are MUCH harder to catch and this is the whole point. its the hunt and fight siamese are mongrel carp cross strained years ago for sheer size dude and they put up the most boring of fight because they have agility of dawn french on a pushbike lol,,,, and moreso in the case of venues such as rainbow the smarter strains do you up quickly too in the mllions of snags to do 3you on unlike a hole in the ground ..in thailand lol..... and I do happen to know a little bit about carp in general.