Once again the Benelux carp fishing record was broken on May 20th by Dutch angler Bart Voeten. 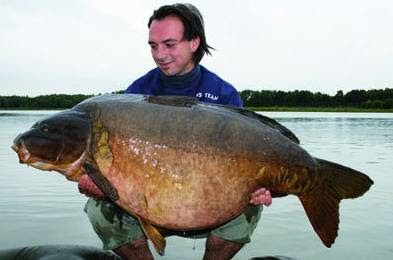 Marc Pansar with 'De Mohikaan' at 82lb in 2009
Shortly after Pansar's record breaking capture (that surpassed Eddy Sterckx's record carp from 2007) another huge carp was caught in 2009 by fellow Belgian angler Peter Kuppens.
Kuppens managed to land a huge common carp at a weight of 82lb 5oz, just topping Pansar's record catch from a couple of months earlier. 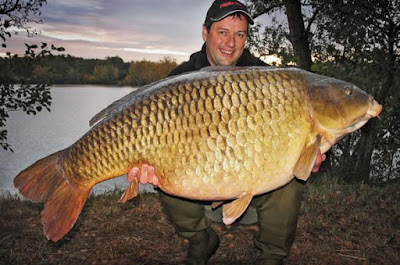 Peter Kuppens with 'The Big One' at 82lb 5oz in 2009
The carp (see picture above) was nicknamed 'The Big One' and was taken from the so-called V-kanaal (V-channel) in Northern Belgium.
ONCE AGAIN DE MOHIKAAN
Now once again Peter Kuppens record was just broken by Bart Voeten, who landed De Mohikaan on May 20th at 82,56lb (37,45 kg).
Since Pansar captured the huge and beautiful mirror carp, the fish has only gained a little bit of extra weight, and it seems as if there isn't much extra weight to be put on for this fish, making it quite probable that this latest record will last for at least a couple of more years.
The Mohikaan right now again is the official Benelux carp fishing record. The biggest Dutch carp ever caught until now was a 69lb 3oz common carp, caught back in 2000 at Nieuwkoopse Plassen by Dutch angler Joop Butselaar.
Belgium Benelux De Mohikaan World Record