The very first World Catfish Classic was won by a Dutch team, catching a total weight of 268,3 kg during the 3-day event in the Spanish Ebro-river.

The biggest catfish caught during the competition was 91 kg.

From May 31st until June 3rd the very first World Catfish Classic was held on the famous Ebro river near the Spanish town of Chiprana.

A total of 44 teams from all over the world participated during the 3-day event, including six Dutch teams.

Eventually two Dutch contestants (see picture above) ended up first with a total weight of 268,3 kg, just enough to stay ahead of a couple from the United States.

Check out the final standings below:

The Dutch duo Ron Beugelink and Arnout Terlouw won the event and will take the biggest part of the total of 35.000 pounds in prize money.

BIGGEST FISH
The biggest catfish caught during the event was a specimen of 91 kg, taken by a French team on the second day of the event. Other big fish weighted in at 73 and 71,2 kg. 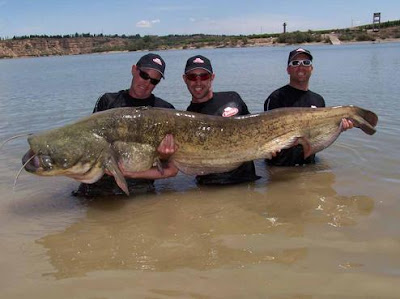 The French teammembers Francois en Josserland with the WCC-record catfish of 91 kg
Of all participating teams, 10 out of 44 were unlucky and didn't manage to catch a single catfish. The total weight captured by 34 teams was 3466,7 kg, with an average weight of 33 kg for a total of 105 catfish.
The current world record catfish is 250lb 5oz, taken on the Italian river Po in 2010.
Catfish Ebro Spain World Catfish Challenge