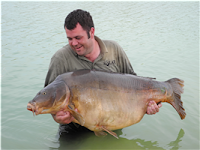 After a long period with hardly any news about The Scar, we recently found out that the world record fish has been caught recently by British angler Terry Elwood at 87lb, 12lb short of last year's record weight.

During a weeklong stay at Les Graviers near Dijon in France Elwood captured a total of six carp, of which, apart from the Scar, also a 64lb and a 56lb specimen.

ANOTHER CAPTURE REGISTERED
After Ambrose Smith broke the world record carp last year with the Scar, or the Scarred Mirror, at a recordweight of 99lb in June, we didn't hear a lot from Les Graviers.

Now it seems that The Scar was captured in late 2010 as well at a weight of 93lb by Paul Roberts.

Apart from The Scar, Les Graviers is also home to a couple of other huge carp, including the Brown Fish, that was captured several times at 80lb+.