The Spanish catfish only came 5lb short of breaking the world record captured in Italy at 250lb in 2010.

The huge catfish was captured in the river Segre near Mequinenza, located near the famous Ebro river and is the biggest catfish ever taken by a British angler.

The 245lb giant came short just 5lb of breaking the current world record catfish, taken in Italy in 2010 at more than 250lb at the Po river. 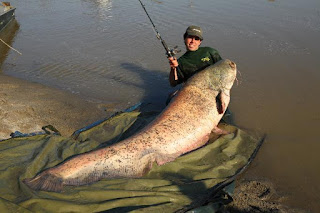