The carp record for the well know French fishery Abbey Lakes near Paris has been improved once again with the same fish.

The mirror carp Shoulders was captured at a new record weight of 37,95 kg by Belgian angler Hans Schoenmaekers.
Like many French fisheries Abbey Lakes is known for one of it's biggest residents, a mirror carp nicknamed Shoulders. Since at least 2009 this mirror has been caught on a very regular basis, reaching bigger weights all the time.

Early December 2011 Shoulders was captured a reported two times, first at the new record weight of 37,95 kg (83lb+) by a Belgian angler, followed only a few days later on December 5th at a weight of 36,8 kg by a Swedish angler. 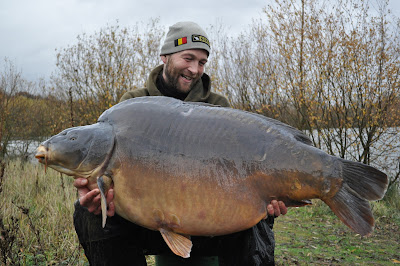 With his capture Hans Schoenmaekers from Belgium (see picture) now is the new Abbey Lakes record holder, completing a long list of previous recordholders with the same fish Shoulders.

The record catch was made on Etang du Héron at swim #8.