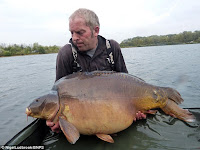 The huge fish weighed in at 68lb 8oz, topping the former record 'The Parrot' with 7oz.

Although the new record fish still has te be approved by the British Record Fish Committee, its looks certain that 'Captain Jack' will be the new official UK carp record with 68lb 8oz.

Bricklayer Nigel Ludbrook, 49, landed the record fish last month during a 2 day fishing trip at the Holme Fen fishery in Colne, Cambridgeshire, according to a Daily Mail article dated October 26, 2017.

Ludbrook used a self-made bait that included white chocolate. The former record carp had a weight of 68lb 1oz and was nicknamed The Parrot.

For a long time the UK carp fishing record looked unbreakable following the 2008 capture of the legendary mirror carp Two Tone at a weight of 67lb 14oz. The new record fish only just passes this weight.
Captain Jack UK